The only daughter of Hortense and Clinton Canady, Jr., Alexa Irene Canady had great professional role models at home. Her mother was an education administrator and her father was a respected dentist. Born in 1950, she also came of age at an ideal time for breaking barriers. By the late 1960s, the civil rights movement finally had the power of law behind it and feminists were beginning to open doors for women.

Dr. Canady’s next stop was Yale University-New Haven Hospital in Connecticut, where she was the first female and first African-American to pursue a residency in neurology. A specialization in neurosurgery was not considered women’s work in the ’70s, and many people tried to discourage Dr. Canady. The most serious opposition came from her university’s Chairman of Neurosurgery, who did not want to accept her into the residency program despite the fact that she was an honor student. “He [the chairman] made me come for a second interview on Christmas Eve,” Dr. Canady said. “People advised me that a supportive chairman was the most important factor in completing your residency so I ranked his program way down my list.”

It was during this residency that Dr. Canady was referred to as “the new equal-opportunity package.” This did not discourage her — her excellent grades and academic distinctions proved otherwise. She even met mild resistance from her parents, “who thought I would be disappointed and not get in.”

Dr. Canady also had to overcome personal doubts. In a recent email interview she said, “The greatest challenge I faced in becoming a neurosurgeon was believing it was possible.” Despite the opposition and doubts she excelled.

Dr. Canady completed her neurosurgery training in 1981, when she became the first woman and first African-American to complete a neurosurgery residency in the state of Minnesota. She made history on May 11, 1984 when she became the first African-American woman certified as a diplomate by the American Board of Neurological Surgery. “I did not expect to be the first” woman neurologist, she said. “There was a woman at the University of Chicago ahead of me but she dropped out.”

She became Chief of Neurosurgery at the Children’s Hospital of Michigan in 1987 and remained in that position until she retired in 2001. “My areas of expertise are congenital spinal abnormalities, hydrocephalus, trauma and brain tumors,” Dr. Canady said. She chose pediatric neurosurgery because so many children fall victim to neurological illness.

Dr. Canady, now living in Pensacola, Fla., came out of retirement and reinstated her medical privileges in 2004, when she discovered she was “the only pediatric neurosurgeon in the Panhandle of Florida.” She is now a consultant and part-time surgeon with Sacred Heart Medical Group. 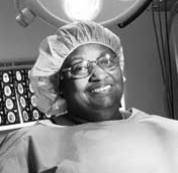 When asked what effect she has had on the lives of women — especially African-American women interested in pursuing careers in neurosurgery — Dr. Canady said, “The impact of my presence is that the world of neurosurgery is no longer ‘theirs’ [men’s] and when I was a professor, for some of the students who want to be neurosurgeons, their gateway is me.”

Her counsel for all women interested in pursuing a career as a neurosurgeon is, “Challenge yourself with the hardest courses and material you can find. At a certain point in your schooling, everyone is smart and the one who does the best works the hardest.”

This article was edited by Michele Hush. Check out Michele's blog at Divinipotent Daily